Between the Mr. Green murder resolution and the Carson/Hughes/Patmore game of sexual telephone, I couldn’t help but wonder if Fellowes was trying too hard to appease the masses. The Green saga has been frequently singled out as the show’s worst storyline and fans have been clamoring for a Carson/Hughes romance for years now. I can’t say I’m disappointed that Fellowes has decided to give the people what they want, but his writing left a lot to be desired.

The celebration over the revelation of Green’s killer felt like it was more for the audience than the characters themselves. Did that news really call for a party? Wasn’t Anna in the clear already? A woman’s arrest seemed like an inappropriate thing to celebrate, but then again this did mark the end of an “error.”

I’m not completely surprised that someone like Mrs. Hughes would be uncomfortable discussing coitus with a man, even if it was her future husband, but Fellowes took it too far by actually having Mrs. Patmore talk to Carson. The whole thing went from an awkward joke to an equally clumsy attempt at sincerity. It felt sort of like an excuse to give Patmore something to do as involving her felt both forced and ridiculous and it robbed the story of much of its emotional impact.

Unsurprisingly, much of the episode revolved around change. Barrow’s plotline was my second favorite of the night. He’s in a pretty rough position. He’s not old enough to retire like Carson and not exactly young enough to completely switch professions either like Andy. As an under butler, he would also be at a disadvantage competing for job opportunities against trained butlers who might find themselves in the situation Spratt almost believed he was in.

I liked how Thomas didn’t immediately resort to malicious scheming after he learned his job was in jeopardy. I wouldn’t be surprised to see this happen in the next few episodes, but it’s nice to see Barrow evolving as a character. He certainly deserves more after all these years.

Speaking of Andy, his introduction is mildly puzzling. Given the shortage of background servants, it makes sense that they introduced him if for any other reason than to occupy space. I don’t really care that he wasn’t given much to do. I didn’t love the “don’t trust Thomas” retread, but it wasn’t a major plot point either. 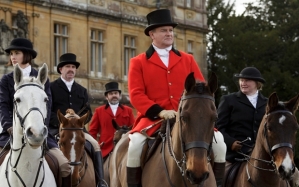 Downsizing is inevitable, though I’m glad it’s not doing it under the pretense of “Downton is failing.” The Dowager was also right to bring up the issue of people losing their livelihoods, especially considering how the characters justified the necessity for Downton’s survival as a place of employment back in series three. It’s a case where you see both sides of the equation.

My favorite storyline belongs to one of my least favorite characters. I thought Edith’s scenes were all perfectly done and I like the direction they’re going in with her character. Her romantic storylines have been far less interesting than her professional ones and it does make sense that she should move on from Downton, unless they want to replace Isis with 100 cats.

I wasn’t too impressed with the Violet/Isobel hospital feud. It’s already been done before and with an episode that heavily dealt with change already, I found it hard to care. Very little of it felt organic.

Which is explained by the scene where the Dowager lays down the law with Denker in front of Isobel. The hospital fight felt very reminiscent of series one. Even though the two have always been on opposite ends of the change spectrum, it still felt like a weird fight for them to have.

The Daisy storyline was mostly good, though I wish they didn’t waste any time trying to get anyone to believe that Daisy would actually get fired. I suspect she will leave by the end of the series, but it seemed out of character for Carson to strongly suggest that she’d committed a “dismissible offense.” Carson may be a stickler, but he’s never fired anyone. The two who have been fired from Downton, Ethel and Jimmy, were sacked by Mrs. Hughes and Lord Grantham respectively (he did advocate for Thomas’ firing in series one, though he and his Lordship were on the same page. Edna technically left on her own accord).

The blackmail was a bit of a shock. Mary’s affair with Lord Gillingham wasn’t exactly something I expected to see surface again, but it was handled well. I was disappointed not to see Matthew Goode’s Henry Talbot in the episode. I suspect that Mary’s romantic endeavors will take a backseat to her managing the estate for the next few episodes.

What to say about Molesley, the greatest character of them all? He wasn’t given much to do. I wonder how much he gets paid. He wasn’t mentioned as being a luxury when Lord Grantham mentioned Barrow’s position, which suggests that he’s paid like a footman. That’s pretty messed up given his age, training, and tenure in service to the Crawley’s.

I’m really tired of the “Molesley as footman” joke. I understand that it’s necessary to keep him at Downton, but it’s not entertaining to watch how Carson treats him. He’s a grown man working a job meant for teenagers. The humor in that wore off a long time ago.

Tom and Lady Rose’s absences were felt. Rose had plenty of crap storylines and Branson’s departure was a bit drawn out, but the house feels empty without them and the kitchen maids, even if the children are allowed downstairs now. We didn’t even see the single hall boy!

All in all, I didn’t love this episode. It did what it needed to do, but the dialogue was a little rough around the edges and some of the storylines didn’t click as well as they should have. I do think it’s headed in the right direction, which is what really matters.

Change has always had a consistent presence on Downton Abbey. Being a period drama, we have a fairly good idea of where the show is going to go as it creeps closer to its inevitable finale. Despite this, the show has done a remarkable job in breathing new life into the old house and decaying aristocratic society.

We saw this particularly in season three with the arrivals of Alfred, Jimmy, and Ivy, which gave the show’s dynamic a breath of fresh air. The youth movement did wonders to negate the feeling that from here on out, life at Downton would veer from the extravagant to the simplistic. With Alfred’s departure in series four, Ivy’s after the Christmas Special, and Jimmy’s after the first episode of series five, that youthful energy is all but gone, leaving Daisy in a similar holding pattern she was in at the start of the show.

The absence of the three of these characters isn’t a big loss from a story perspective. Eight episodes is hardly enough time to adequately address the show’s ensemble cast anyway. Their departures address something that we’d all rather avoid. Things are winding down and now it’s starting to show.

The future was a predominant theme is season five. Carson, Hughes, Patmore, and the Bates all made arrangements for their retirements while Tom continued to grapple with his desire to leave for America while taking Sybbie’s best interests into consideration. Lord Grantham continued to weigh the interests of the village against his obligation to preserve the way of life that can be threatened by those whose interest lie solely in monetary game. Mrs. Crawley debates a marriage proposal to the disdain of Lady Violet, who fears losing her treasured companion as selfish as that may be.

Problem is, this is all familiar territory. Edith and Tom’s storylines are merely continuations of plots from last season that could, and probably should have been wrapped up. Lady Rose’s late season courtship with Atticus is just about the only fresh plotline to be had other than Mrs. Crawley, who unexpectedly found herself in possession of one of the show’s better stories.

The Bates remain the biggest thorn in Julian Fellows’ paw. He has never really known what to do with them. Sadly, this has resulted in yet another murder plotline that’s even more droll and tedious as the first. It’s hard to imagine that #freebates was ever a legitimate fan rally as the couple hasn’t had a positive moment in years.

Fan sentiment also provides a roadblock for Lady Edith and her illegitimate child. It’s sad story. It isn’t a particularly interesting one and Edith’s years of being an annoying/whiney character didn’t do the plot any favors. After five seasons of watching her mope around, it’s hard to care.

This season had a few shining moments worth remembering. Miss Bunting quickly became of the most hated characters in the show’s history and Fellow’s timed her depature perfectly as to not allow her to overstay her welcome (or rather unwelcome). Thomas received redemption of sorts from Dr. Clarkson in one of the season’s most touching moments. Molesley was Molesley and as such, got his own article.

I watched an old season two episode in between episodes to see the contrast between then and now. It’s to be expected that shows drop off a bit as they get older. Even a worldwide phenomenon like Downton.

The problem is that Downton has an identity crisis, a problem that’s existed since the World War I storyline ended but was exacerbated by Matthew’s death. The show knows where it’s going, but it doesn’t know what to do with itself in the meantime. It seems to be a fairly safe assumption that next season will be the final one, which may not be such a bad idea.

Downton Abbey is certainly more entertaining the most of what’s on TV, but it’s also clear that the show is well past its prime. Fellows overindulged in repetitive storylines and drew out others unnecessarily. It’s hard to call season five bad, but when the bar was raised so high from previous years, the drop in quality is a tad unfortunate. The Dowager would certainly not be impressed.