Note: this article contains spoilers for the rest of season six. American viewers will want to wait a few weeks before reading this article. To jump directly to the spoiler-free section of the site, please click on “American recaps.”

While many hearts broke for Lady Mary following Matthew’s tragic death, my sympathies belonged to his valet. I spent the break between series three and four fearful for the departure of Downton’s great cricket champion. Thankfully, this did not come to fruition though the solution was less than ideal. Since Mr. Molesley has moved on to bigger and 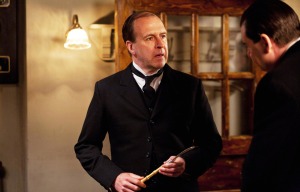 better things in the Downton schoolhouse, I wanted to take a look at his time as England’s oldest footman.

I’ve long referred to the necessity for Molesley to be a footman as the “Molesley Dilemma.” It is ridiculous and rather implausible that a trained butler/valet would spend three years of his life working as a footman, unable to find any better job anywhere else. We the viewer know that Molesley is at Downton because the show can’t afford to lose the highly talented Kevin Doyle, but I don’t think that Julian Fellowes ever made much of an effort to explain why the character needed to be there.

The first problem came about in the first episode of series four. Unable to procure employment, the down and out Molesley returns to Crawley House to ask the grieving Isobel Crawley for his old job back. A job he lost mind you, because Lord Grantham decided that Alfred wasn’t good enough to be Matthew’s valet. Now, we can kind of accept that a grieving mother may not have any use for a butler. Except for one problem. She’d take in the down and out Charles Grigg in the same episode! Hypocrisy? At least a little bit, though Isobel did try to have Molesley killed at the start of series two. It’s not as if Molesley’s wages wouldn’t be paid by the big house anyway.

Which isn’t to say that I’m sad that Molesley didn’t return to Crawley House. He belongs in the big house, not as Ethel part two. There just isn’t a reason given why this solution to his character’s problem is cast away so flippantly.

This problem surfaces again in series six. Barrow spends the entire series interviewing for jobs. Why isn’t Molesley looking for other work? It isn’t even mentioned once. We can accept that Molesley doesn’t want to leave and that he isn’t being pushed out. Molesley is also a fifty year old man with presumably zero savings. Once again the audience has a different lens to view the situation. There were hints that he would become a teacher in series five. That doesn’t excuse why he doesn’t once consider looking at other positions before he’s handed a job as a teacher.

This wouldn’t bug me if there wasn’t such as easy explanation. Molesley could’ve simply said that he wanted to stay at Downton to be close to his father. A solution could’ve been had in a few simple lines. It’s hard to look at this situation as anything other than lazy storytelling.

I’ve never been particularly appreciative of the humor surrounding Molesley’s position either, particularly from Carson. The butler forced Molesley and others to beg for a position clearly beneath his skillset. How stupid/insensitive is old Charlie anyway? This surfaced again in series five when Jimmy departed and we were treated to that “first footman” bit as if Molesley’s position should be a source of humor. As Patmore noted when Joseph was working as a delivery boy, “there’s no shame in hard work.” Seeing people take jobs that they’re overqualified for because they need to survive should be inspiring, not humorous.

Of course that can be seen as making a mountain out of a mole(sley) hill. I’m okay with that. Downton is a show about change. There were plenty of people in service who had to take plenty of undesirable jobs because their positions no longer existed. As a show, Downton only seemed concerned about that when it was convenient to the plot. Barrow cannot find other work in series two and throughout much of series six (and is also faced with the need to depart in series three), but Jimmy gets another job in two seconds after he’s caught in bed with Lady Anstruther. A little consistency would be nice.

Ultimately, it’s hard to argue that Molesley didn’t benefit from his fall from grace as a character. His relationship with Baxter would look quite different if he was still a valet with secure employment for the rest of his working days. My only problem is that it wouldn’t have taken much more to fully flesh out his predicament.

Molesley’s time as a footman was an unfortunate necessity for the show. Kevin Doyle ran with the opportunity and used to it further endear the character to the audience. I certainly wouldn’t have written this article if he hadn’t done such a marvelous job. Naturally, this affection leads one to want the best for Downton’s most versatile servant, a character who always offered kindness even when he knew he’d received none in return.

One thought on “Evaluating Mr. Molesley’s Time as Footman”